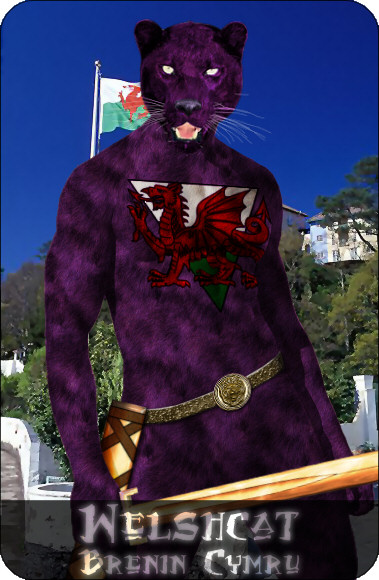 or ‘King of Wales’. I see the Ultimate Welshcat as being like T’Challa aka Black Panther, a champion and ambassador for his people and country. I liked the Universe X take on Black Panther and thought it would work here.

The base model is Antonio Sabata whom i beheaded. I have used this base for previous submission(s). The head is a panther cut from the original and grafted on to the body. It was simpler to cut the whiskers and redo them from scratch. The body has two fur texture layers one purple, and one mottled on overlay. The head was colored and additional mottled fur texture added to match. I promoted the eyes mouth and nose over the color layers to retain the correct colors for them. The chest logo is cut from a welsh flag, and distorted onto the chest. The sword and scabard were done originally for my Valkyrie manip but I decided to re-use them here to get a sort of Captain Britain/Arthurian vibe going too. The belt created from scratch and the lion head was from a medallion. The background is of Port Merrion (setting of The Prisoner tv show) Meeowww;)