The first hour challenges were to produce sketches for the following characters:

And here are my submissions: 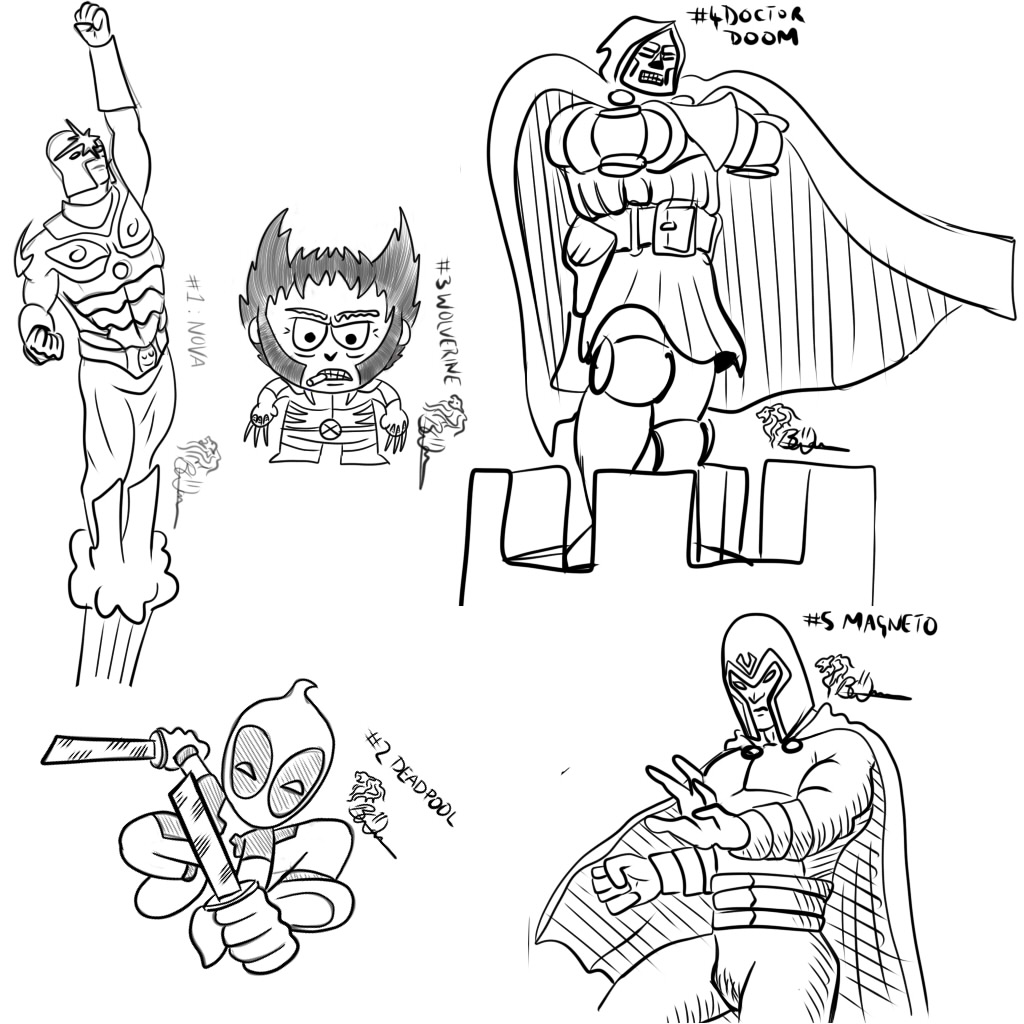 Wolverine: Old Man Logan is an eight-issue storyline from the Wolverine ongoing series by writer Mark Millar and artist Steve McNiven. It began in June 2008, ran through Wolverine #66-72 and ended in Wolverine Giant-Size Old Man Logan in September 2009.

oday’s daily sketch was to do a representation of this old Wolverine [link]. Done in Sai using Simon Lang from Avatar as the photo reference.  Time taken just over 60 mins 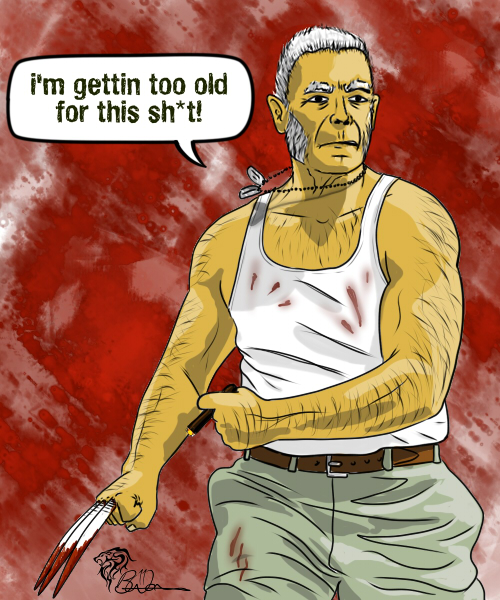 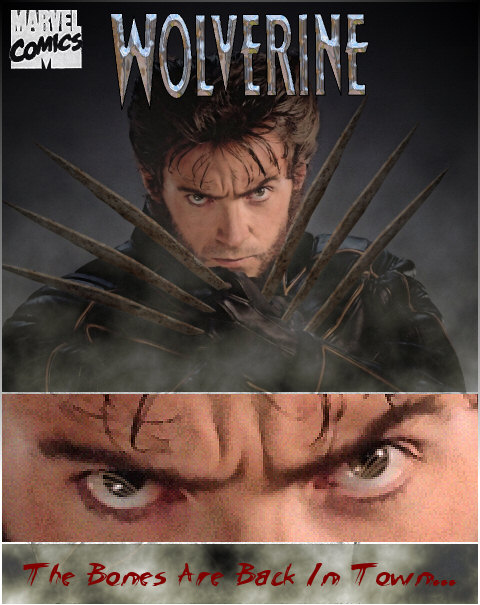 Just tidying up on an unfinished pic. I did this back when I was redoing my ‘boneclaw’ Wolvie but it didn’t make the cut as it was. Some filtering (to create that not quite photo look) and some smoke, and a slightly different layout, and I don’t think it makes a a half bad cover design. Plus I get to make a pun in the title.. 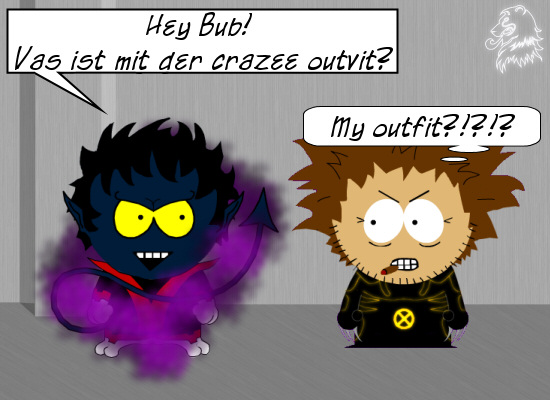 Another South Park-esque work.. heh what can i say.. I love these little dudes.. Wolvie is an old one.. Kurt is all new (as seen in the Excalibur pic)

Well I had a bit of a brainwave, and here is an animated banner version of the Kevin Newburn sketch I previously colored. I cut the arms/claws and repositioned them to fit the frame. I promoted the claws to their own layer, this let me save out the frames for the animation. I motion blurred the claws for one of the frames. The animation was put together in animation shop, where the wavy text was added. Hope you like it Kev.. feel free to use it if you want 🙂 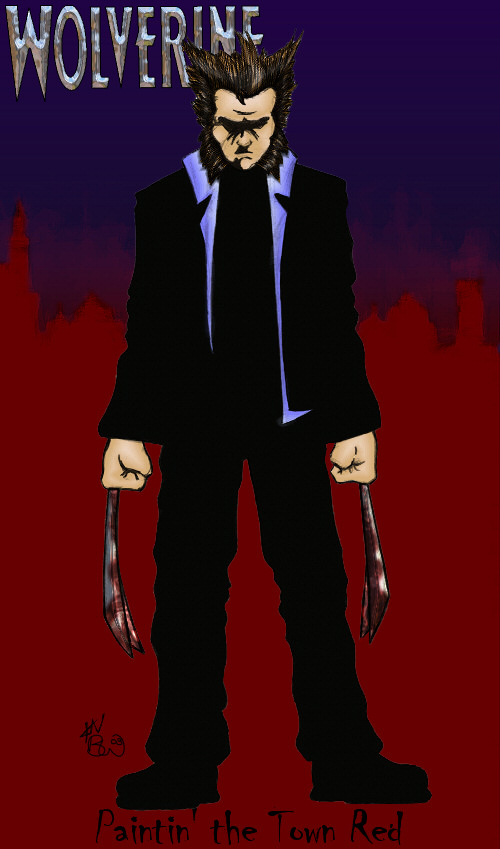 The original B&W pic by Kevin Newburn posted to the DCG inspired me to try my hand at a more simplistic coloring style. 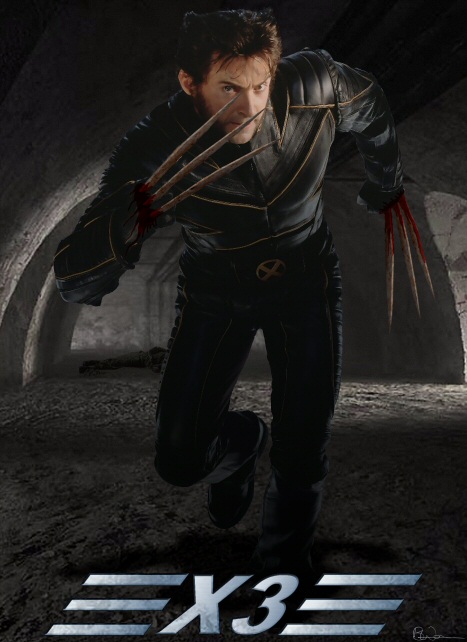 Based on the comments in the UIRs on my previous ‘BoneClaw’ Wolverine, I went back to the drawing board and began again. This is my first manip using PSP8.

I started with a much better quality pic of Wolvie running towards the camera in front of what looked like a bluescreen. The tunnel background was downloaded from google and placed over the top of the wolverine image, I then cut out wolverine’s shape from the background. I used the original metal claws to line up rectangles of my bone texture and then used the lassoo tool to cut out the shape (i made them longer than the originals). I also used the lassoo tool in conjunction with HSL to darken the flat sides of the claws. The blood was drawn on a multiply layer and then smudged out. The body on the background was added from another google find. logo from scratch. Let me know if this is an improvement. Using the same selection I cut out the background with I created a filled shape which was blurred, and distorted to make the shadow on the floor. I also made a gradient filled selection to tint wolverine to match the background more. 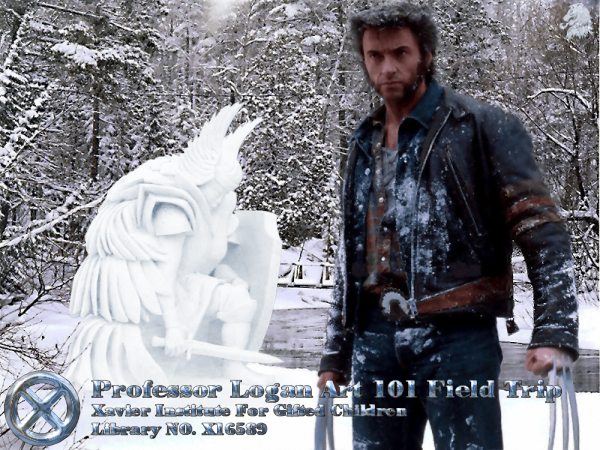 By the time this pic goes up I hope that everyone who wanted to see X2 has managed it. This is just a quick manip based on one of the funny moments in the film. At Bobby Drake’s parents Wolverine is introduced as Professor Logan. When asked what he is professor of, Logan replies Art. I remembered this pic from the first movie of wolverine in the snow and I thought with his skill and claws, Ice Sculpture should be a piece of cake for him. Just a bit of fun, bit of blending and shading to make the statue match the pic. 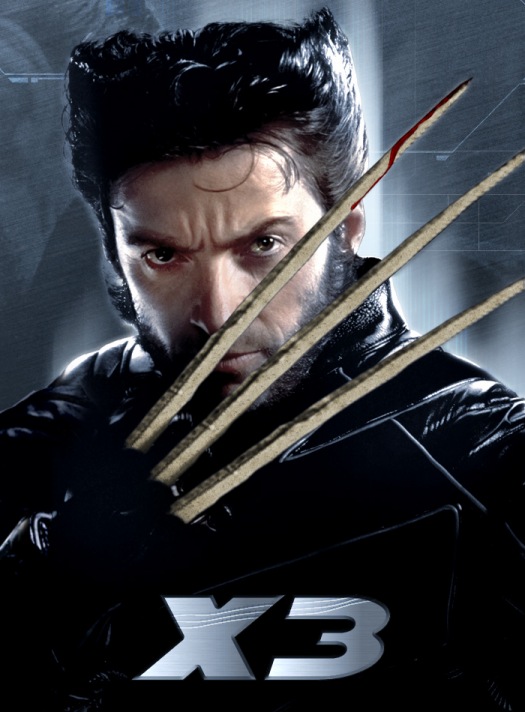 Just a quick manip of something I would like to be shown in X3.. how Wolverine’s claws were not infact artificial, but were natural. They could do this either using Magneto to extract the adamantium OR maybe just have a flashback, with a repressed memory surfacing. Started with the Wolvie X2 wallpaper. The claws were created using the metal ones as a guide. I used an actual bone texture I found online. Shaded manually. Added extra reflections to the eye. The logo is from scratch. The font is called RedFive. 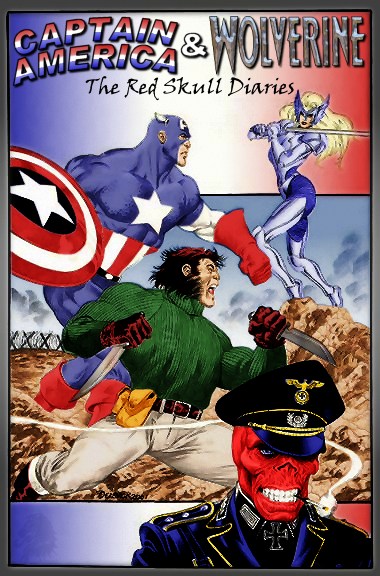 Another digitally coloured Tom Derenick sketch. I particularly like how this one turned out. Some of it was very fiddly, but using the lasso tool to help me restrict where i was coloring helped. I am actually enjoying this colorist lark.. whether i have found my new calling in life is another matter. The Cap logo is done from scratch, and you may recognise the Wolverine logo from my earlier Hulk Vs Wolvie pics. 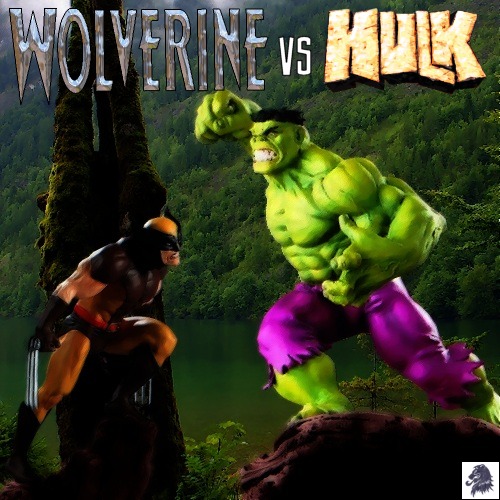 This is a varient of the first pic using Hulk and Wolvie busts to recreate their battle in the woods at the lake. The combined pic was then run through my ‘sloppy painting’ process to give the effect you see and I added the logos. I prefer this version to the first one, but what do you think? 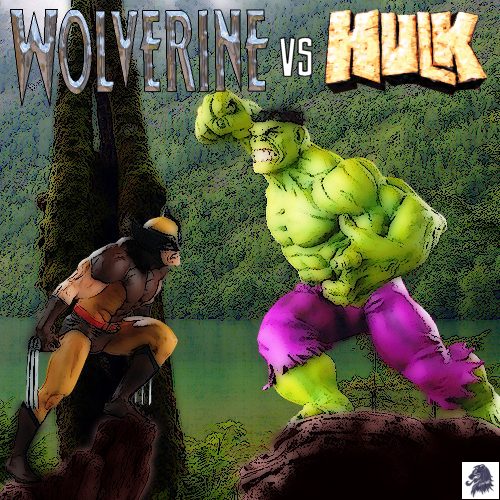 Another in my series of manips using busts as the basis for the picture. This is the first version of a pic using Hulk and Wolvie busts to recreate their battle in the woods, this time beside a lake. The hulk model is pretty much untouched other than altering the angle a bit to give more of a lunge. Wolvie I had to alter the angle of the head so he was looking upward slightly rather than down. The combined pic was then run through my ‘grainy drawing’ process to give the effect you see and I added the logos. 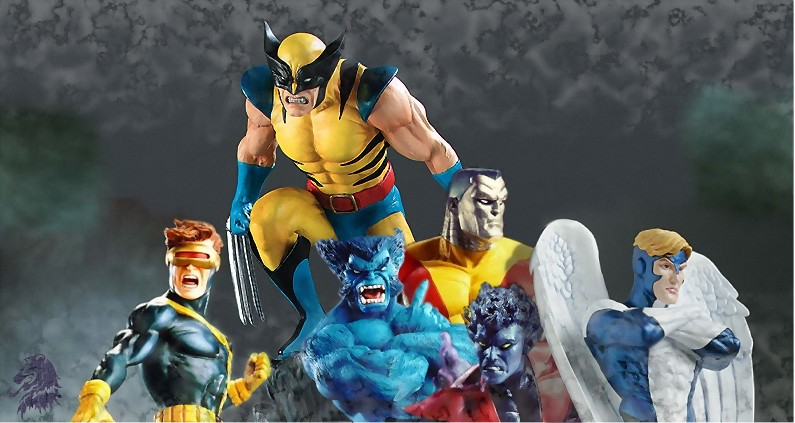