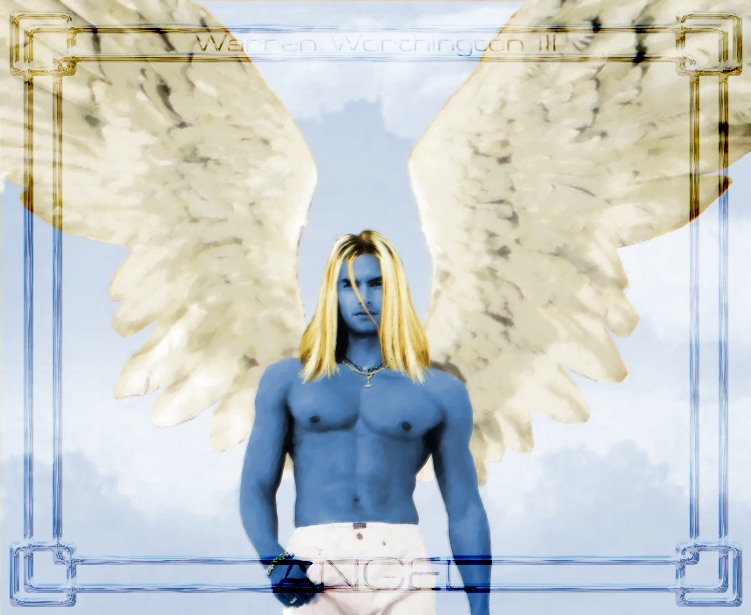 Time for a quick manip. Here is model Marcus Schenkenberg as Warren Worthington III (while still in his post Apocalypse blue phase – but with regrown natural wings). It was created from two pics of Marcus, a small grainy one i found of him sitting in a very orange room with wings.. and a second larger black and white image. Enlarging the winged image, I cut out the wings and put them on a layer behind the black n white pic. Much smudging and cursing later and i got it looking reasonable. I smudged the black n white pic and colorized the skin and jewellry. The hair was done on a seperate layer and turned out not bad although it is still a bit smudgy at the ends. The pic at the background is Stirling Castle. The logo font is Federation. 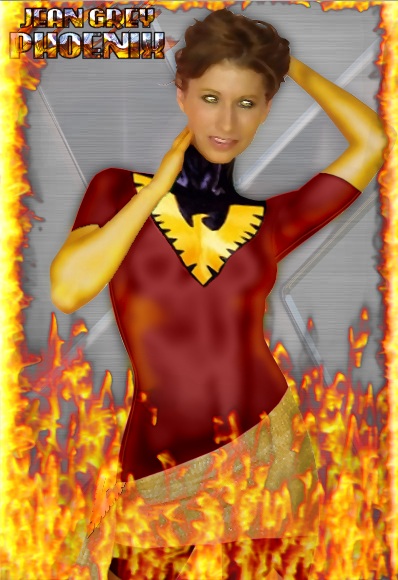 An altered version of my previous Phoenix. This time as Dark Phoenix with flames and some nice shiny eyes;) 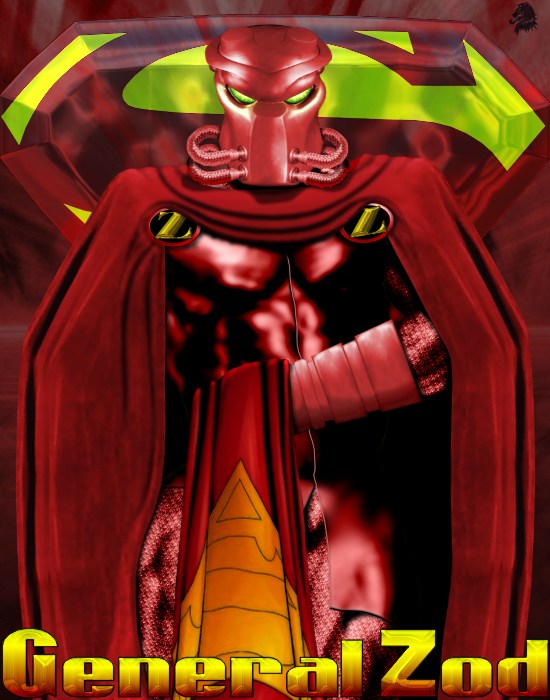 JuvenileMike issued a challenge to do General Zod way back in November 2002 on C2F Here is my interpretation of Zod from the latest Superman run. I took some liberties, but i think they work.

The base model for this was body builder Chris Cormier. I started this months ago and have dipped in and out on a fairly frequent basis. The helmet was proving to be a complete and utter bastard, but i had a bit of inspiration when i found a nice clean pic of the Predator Mask, which i messed about with until it had a pleasing feel. The tubes were created by combining various sections of different industrial cable tubing bit. Added shading and shadows by hand. I particularly like how the eyes turned out.

The cloak started out as a piece of velvety fabric which i duplicated a few times and smudged together, adding hi and lo lights. The chainmail is an overlay layer containing the whole body with texture added and distorted to match muscles etc. The tunic is the body promoted to a layer of its own and smudged and softened. shadows were added to lift it away from the body where needed. The superman cloak was done using the vector tool and painted manually in various shades. Overall there are well over 100 layers in this piece. 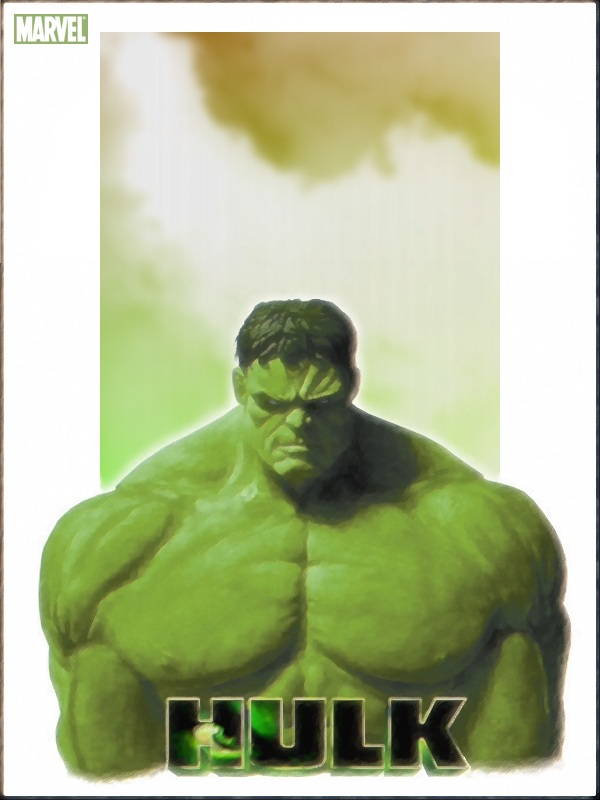 Just a cover concept for the adaptation of the HULK movie into a graphic novel. I think it kinda has an Alex Ross feel to it.

This is the latest in my series of manips based on busts.. although the base pic for this wasnt a bust as such.. but a cookie jar!!!. I found the base pic while browsing through a comic memorabilia store online, and it immediately caught my attention because of the quality of the sculpting. The first thing i had to do was remove the line where the lid (head and shoulders) and the body met using the smudge tool. I continued to smudge over the pic to get a more painted look. The bottom of the jar was smudged out to give the impression of paint thinning at the edges. Next I duplicated the layer, applied a gaussian blur of about 4, applied my own combination of brush stroke filters, and set the layer mode to lighten, this gave the picture a pleasing glow.

The Hulk logo was added and givem the same treatment. The ‘cloud’ box around Hulk is just that. It was a bluish picture of clouds at night, which again was given the paint treatment. This was placed on a new layer over Hulk, with the mode set to exclusion, which gives the greeny faded look. The area directly over the hulk was cut away and the edges softened to accentuate the glow. Finally grabbed the marvel logo from their site. I think it turned out pretty nice, so i hope the rest of you like it too. 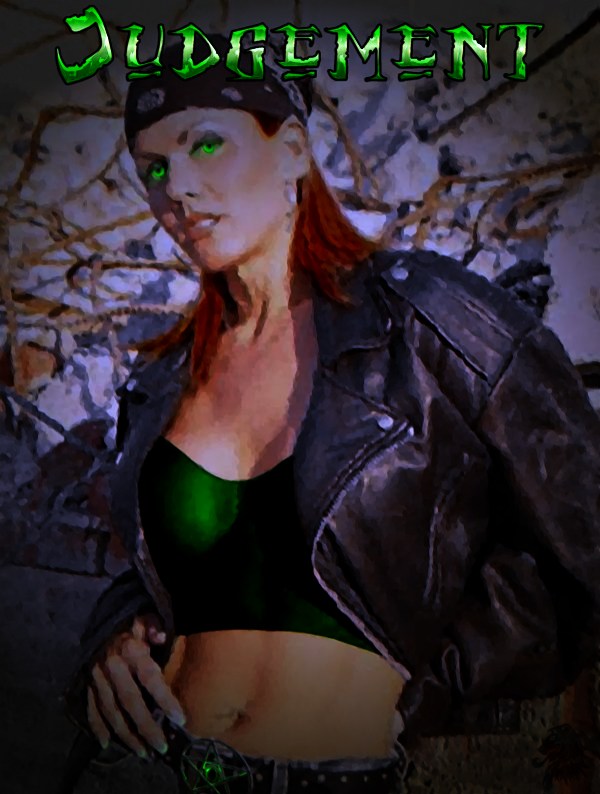 Okay, my first attempt at WWG’s Judgement character needed a little more work so I adjusted the lighting to give it a more eerie moonlit feel. This unfortunately meant some of the other detail was lost, specifically the belt buckle. I compensated for this by adding some green highlighting to make it stand out a bit more. I also made the eyes glow a bit more. I hadnt saved a version without the overdone paint effect so i couldnt do anything about that. 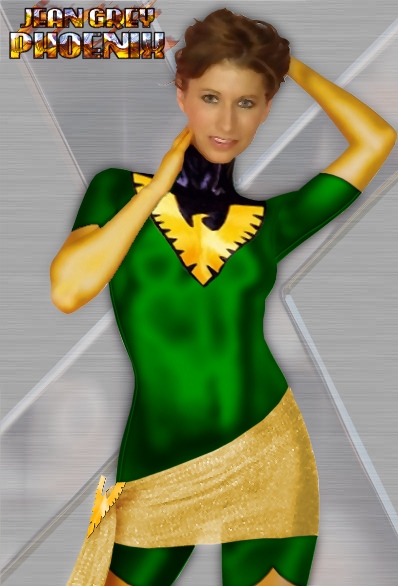 Just some random model off the net as X-men mainstay Jean Grey.. AKA Phoenix. To get a glossy effect on the costume, each part was cut out using the lasso tool, promoted to a new layer, the built in PSP chrome filter was then applied and the whole thing softened using a gaussian blur. I then colourized each layer and set them to multiply the over the original skin color. The phoenix logos were added, with the smaller one being rotated and skewed using the freeform deform tool. The sash is made of some gauzy material coloured gold and here serves an additional purpose of sparing her blushes due to the tightness of the uniform;) (And Yes her neck was that long!) 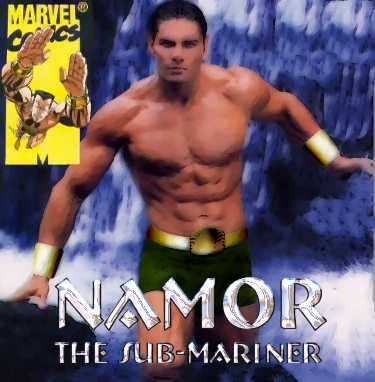 Just a variation on my full Namor cover. This was the original picture’s dimensions. I took the logos from the cover piece and added them to this version. To make it a bit different i did some smudging on a Darken layer to give a painty feel. Could be the cd cover for a movie soundtrack i guess;) 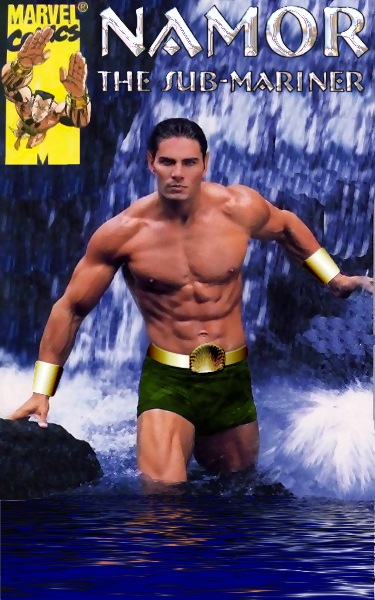 A mock up of a cover for a Sub-Mariner comic book. I’m not sure who the model is but i found it thru a link Lady D posted [Thanks :)]. I Added additional water at the front and extended the background above to allow make a nicer size canvas (although looking at it again it needs more work still to make it a bit less obvious – hindsight eh!). Added the belt, buckle and bracelets using various gradient fills and the burn tool. The buckle is based on an actual shell. Gave him ear points using the smudge tool. Shorts coloured. Logos and title added. 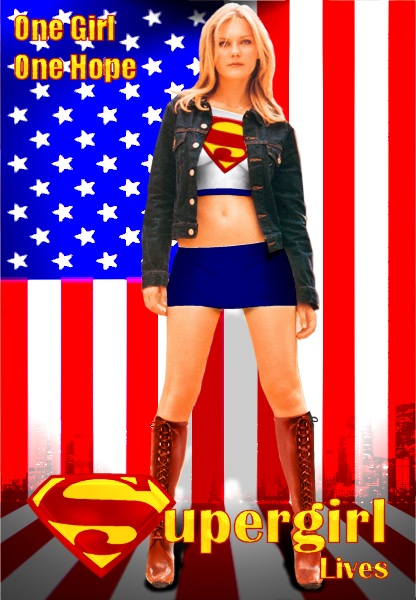 I recently saw someone do a WW manip using this Kirsten Dunst base pic. I immediately said to myself she would make a great Supergirl and so here it is.

The S-logo is my own work using vectors. It is used on her shirt and in the main logo. The t-shirt was made by selecting the exposed skin on her chest and promoting it to a new layer. I then reduced the saturation and colored it slightly blue (as true white doesnt look like real white). I then smudged her breasts to give the impression it was figure hugging [after looking at it for a while, i guess i could have worked at this some more :)].

The skirt was added manually over her pants and shaded with a few wrinkles. The boot laces were added manually to the complete the costume. The background i created previously for some of my Cap America pics. It was lit to give the impression of bright spot lights. Added a shadow on the floor and wall manually using a deformed filled shape of kirsten, blurred using the gaussian blur. Also added a hint of some buildings at the foot of the flag. I think it turned out ok for a couple of hours work.