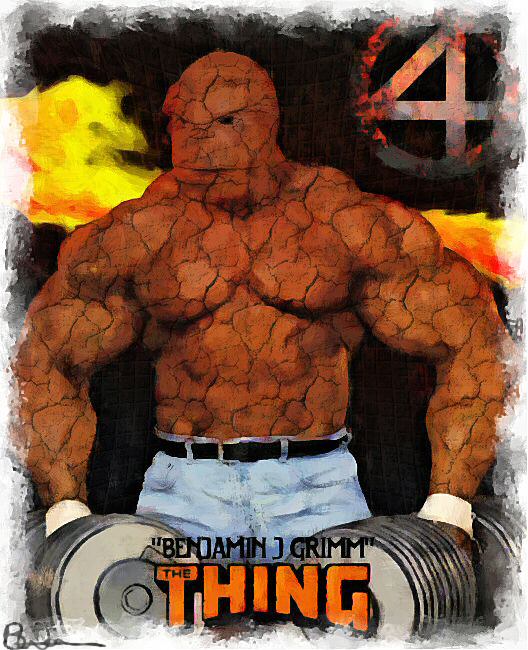 Just an experiment in PSP8 using masks (which I hadn’t used that much in the past). Ben is weight training while Johnny annoys him as usual. The base model is body builder Greg Kavaks, who already had pretty big arms, but I cut these out, enlarged them (and the bar bells) and blended them back into the base pic. The background is made of a few different textures including galvanized zinc and black ceramic tiles. The flame was done using a custom gradient fill smudged into a flamelike trail. an additional softened gradient fill used to give an orange glow to the rest of the background. Thing’s head was based on a mask I saw. USed this to get the basic shapes which were made using the pen and various flesh tones from the base pic. The rock texture is one of my stock and was put on a multiply layer. Edited various mask layers to reveal the sections of the base pic and arms/barbells I wanted to show. The logo was made from one cut from a comic cover, with additional texturing and the rest of the text is done in Fantastifont. The ‘4’ logo is from the teaser pic I submitted previously.