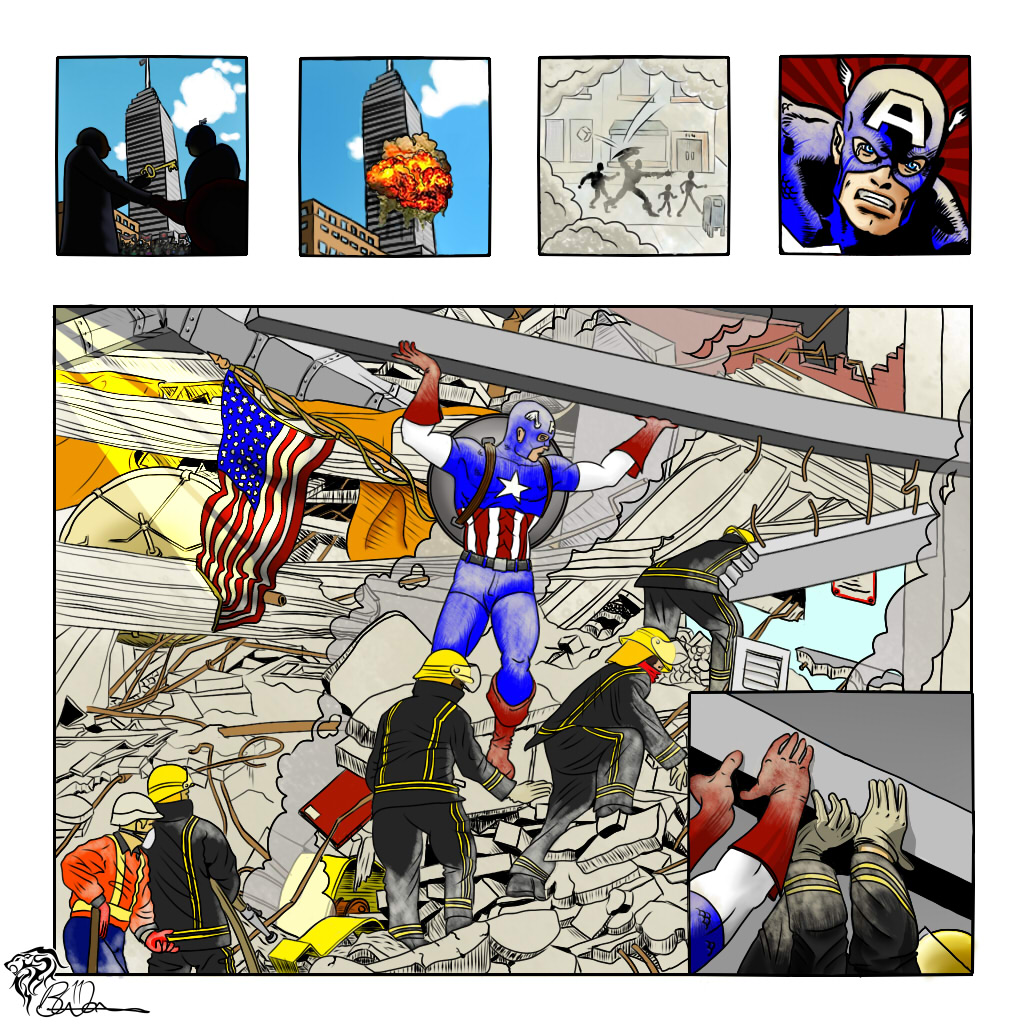 Another day and another presentation, one of the duties that Steve Rogers hadn’t really considered when he stepped into that army laboratory all those decades ago. Not that he really minded, it was just that he was never particularly comfortable with the false pomp, despite having lost count of the number of times he had attended one of these things. He mused to himself that while he would rather have been off fighting somewhere he was also supposed to be a symbol of inspiration to the whole nation – even now when there often was no clearly defined enemy as there had been during World War II. It was perhaps even more important that he show up and press the flesh, make people feel comfortable that there were greater powers out there protecting them.

So here he was in the Village accepting a gaudy looking gold plated key from the chairman of the local business association on behalf of the Avengers as a token of gratitude for saving the City from some menace or other. Steve smiled and waved for the crowds, the mid afternoon sun glinting sharply off his shield and casting reflected light onto the upturned faces around the makeshift stage upon which he stood. A final wave and then down the steps so sign some autographs and take some pictures with the locals. As he descended a flash of light from somewhere high to his left caught his eye and he turned to see a mushroom of flame and dust blossoming from midway up one of the nearby skyscrapers.

Springing from midway down the steps, Cap rushed through the crowd issuing orders for them to move back towards Bleecker Street and away from the explosion. Smoke and dust was already starting to billow down the street towards the milling crowd. Some people were moving quickly back in the opposite direction but others were standing arms outstretched, the obligatory mobile phones in hand capturing the event for posterity.

Leaving crowd control to the police Cap sprinted into the ever thickening dust cloud which was forming between the high buildings, weaving his way through the passers by running in the opposite direction. Sirens sounded in the distance signalling the on duty police had already radioed in what was happening. As he approached the foot of the burning building a deafening crack sounded overhead causing Cap to look upward. A large portion of the side of the building was starting to buckle outward due to the heat and stress. As he surveyed the damage, masonry began falling to the street. Without really pausing for thought Cap gathered up the stragglers exiting the building and almost pushed them back along the street to safety, using his shield to deflect falling pieces away from the survivors.

After ensuring those nearest to the building were clear of danger, the Captain turned just in time to see some of the floors above the flames give up their battle and begin to finally collapse in on to the fire damaged floors below. A wave of worry and anger rose in him, worry that there may still be people in the building and anger at himself for not moving faster. As he watched the flames leaping through the cracked and broken walls of the once tall building he put his anger aside and steadied himself. Sirens blared around him and glancing over his shoulder he saw the flashing lights of the fire engines approaching through the smoke.

As the engines halted the firemen exploded out, moving into position like a well oiled machine. Hydrants were tapped and water began blasting the blazing building, preventing the blaze from spreading further into the damaged building or spreading to it’s nearest neighbours. Knowing it would be foolhardy to interfere with the fire suppression, Captain America took charge of ensuring anyone exiting the building made their way safely to the hastily set up triage area back along the street, near where he had stood smiling in the sunshine earlier.

As the fire was brought under control rescue crews began pushing up into the building, Cap alongside them as they began the search for survivors. The search continued through the night and into the next morning as the teams slowly worked their way up into the mangled mess that was formerly the middle three or four floors of the building. As they passed into the 17th floor, they entered a larger space where the floor above had caved in leaving a large cavern like gap in the centre of the building.

Sunlight filtered in through holes in the outer wall. As they picked their way through the wreckage, one of the firemen heard a faint groan from beneath a pile of rubble. A he rushed over to investigate, Cap surveyed the area. Spotting a large beam which would prevent access to the area he carefully picked it and began lifting it out of the way, muscles straining beneath his shirt. Seeing what he was trying to do other members of the team rushed to help Cap move the beam away.

Together the team cleared away the remaining debris, freeing the unfortunate office worker who had been trapped there all night. As the paramedics arrived to see to the survivor, Cap and his team moved further into the building, their hopes of finding more survivors raised.