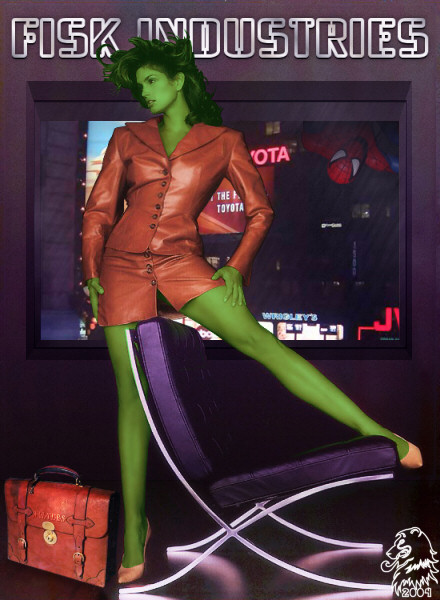 Ok, I wanted to do a follow up to my Elektra/Loss Adjuster pic for a while now, and when I found this pic of Cindy Crawford I immediately thought it would make a great base for She-Hulk, Jennifer Walters.

The source image was a bit messy so I had to do some tidying before I began. The first thing I did was to broaden the shoulders and deepen the chest using the free deform tool. This was then blended back into the original image. I then created a mask of ‘shulkie’ so I could keep things neat later. The background is created from scratch over the original murky black curtain. I used some mauve gradient fills to create a floor/wall join and to provide some lighting. I used the same effect to create the window behind ‘shulkie’ making a faux 3d effect to frame the image of new york street signs I found on google.

The spidey is taken from a pic of a statue of him peeking in another window. I shaded him to make him darker and as if lit from the room. Over spidey and the street seen I created a glass pane using the noise filter then motion and gausian blur to give it some interest, and a white/black gradient to make it look shiny. The brief case was another google find which to which I added Walters stenciling and a shadow and floor reflection to blend it with the image. All pretty simple stuff, but I just wanted to make sure I kept my basic skills up during an otherwise dry creative spell.