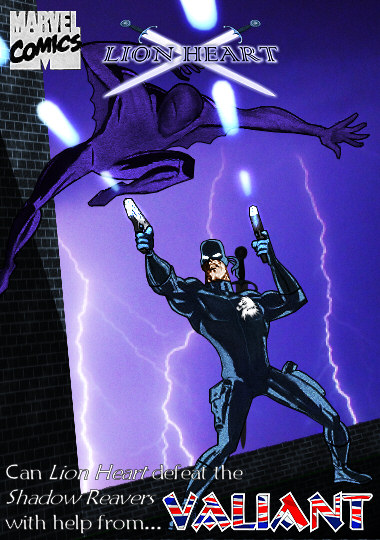 I thought it might be a good idea to do a comic cover for my RPG character Lion Heart. Lion Heart is part of Valiant a UK based team, formerly run by the government. The team were formerly media darlings, but have now been made scapegoats and are currently being trashed by the media. In this issue he meets the Valiant team for the first time, while battling the evil ninja Shadow Reavers…killers on the payroll of The Faction.

Description: Cameron had been staying in Stirling for a few days, when he decided to pay a visit to the Wallace Monument. As he was looking up at the monument, a freak storm appeared out of nowhere from the east. As it approached the monument there was a huge release of energy, which travelled down the tower, and into Cameron, knocking him unconscious.  A few days later, as he recovered in hospital, he read about a battle between the X-Men and an unnamed being which ended up on Edinburgh Castle. The battle had ended with a huge release of energy. Cameron wondered if this was related to his accident.

It was shortly following his release from hospital that his powers began to first manifest. As he was riding his motorcycle to Glasgow one night, the whole machine began to glow, as if lit by some internal source. Screeching to a halt at the roadside, Cam leaped off the bike, fearing it was about to explode. As he let go of the machine the light subsided, leaving it untouched, and looking perfectly normal. He reached out to the bike, touching the handle bars and found by experimenting that he could cause any metal part to glow and By concentrating he could vary the intensity of the light.

A few months later, he was jumped by a mugger while walking home through Glasgow one evening. As he struggled with the man, Cam caught his assailant by the wrist, his hand over the mans metal watch. It was difficult to tell who was more surprised by what happened next. As they struggled Cam caused the watch to light up, and as it reached an almost white peak, there was a flash and a crack like lightning and the mugger fell to the ground stunned. Deciding that discretion was the better part of valour, and knowing the police would ask questions he wasn’t ready or willing to answer, Cameron ran into the night, catching the Subway home.

Thinking it would be best if he got some space to try and make sense of his powers, Cam rented a cottage out in the middle of nowhere, and began practising with his powers, becoming proficient at generating streams of a plasma like energy using a metal rod to channel the field in the direction he desired. By using a hollow tube he found he could create plasma ‘pulses’ like bullets.

It was at this time Cam was offered a job in London, and having nothing to keep him in Scotland, decided to take it. In london he carried on as an Instructor during the day, but at night prowled the darkness, dispensing justice on hapless muggers and criminals who crossed his path. As time passed, he obtained a sword and guns to use to further refine his channeling power, and secretly created a costume, threaded with metal for greater strength. His ability to fly was discovered by accident, when one night he slipped while running over a rooftop.

As he fell, his power kicked in flowing through the metal threading of his suit, slowing his descent. Theorising that his suit was also capable of channeling his plasma, he found that he could change direction, and achieve powered flight.

Abilities: Lion Heart has the ability to generate highly charged plasma using metallic objects as a conduit. Skilled Marksman and Swordsman. Exceptional Athlete and Martial Artist. Using metal threads laced through his uniform to channel plasma and create a frictionless field can achieve flight capability at up to 200MPH for approx 2 hours.

Art Notes: This was based around a sketch I found on google of Punisher shooting at Spiderman. Used the sketch for shaped and the face, shadows and textures added. got rid of the chest skull. Rest of the pic is made up from textures and images I already had on my PC.