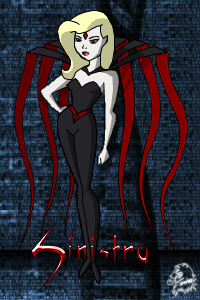 Here is a wee BTAS style pic I did based on a request from from my friend Enchantress over at marvel-boards.co.uk based on the previous manip I did of her character in the new Nomads RPG we have going. The character notes below the image are actually slightly updated (2004) following most of the game participants moving to comicsuncovered.com (disagreements with board admins) and forming the game The Watch using the same characters and basic story.

Victoria is the daughter of Dr. Nathaniel Essex, a brilliant biologist and geneticist, Mr. Sinister is also immortal — granting him a unique perspective on human evolution. Using the genetic material he garnered from various sources he created his “daughter” Victoria. All that is known about Victoria’s “parentage” is the little bit of information she was able to get from her father… Her genetic makeup includes that of Mr. Sinister, X-Man- Nate Grey, Jean Grey and several other “Alpha” class mutants that are unknown to her.
Her powers mimic those of her father. She is able to alter her appearance and shape by molecular manipulation along with her father’s ability to phase, appearing and disappearing as he sees fit, she has an accelerated healing factor…along with being a powerful telekinetic, she has telepathic power. Victoria main power however, is the enormous responsibility of being the last ties to earth that the Phoenix Force has. She hears it’s voice in her mind and has the ability to call upon it and ask it’s aid. Having been a host of sorts for the Phoenix since childhood, she has gained firm control over the cosmic power. Victoria’s powers at one point, used on a high level resulted in severe headaches and nosebleeds. However, during an Atlantis mission, she tried introducing Atlantean DNA to her system to slow the hemophilia she suffered and nearly bled to death in the process, with the quick thinking of Beast and Sage, her team mate, Scott Summers was able to save her life by a blood transfusion. That transfusion gave Victoria and Scott a unique bond, much like the mental link she shares with Beast.

It is unknown how Victoria ages, being as her father is immortal…her aging rate is seemingly slower than that of most normal beings.

Victoria carries a grudge against Sinister. The very mention of his name leaves a distasteful feeling in her mouth. Not knowing anything about her “father’s” alter ego, Victoria grew up loving him, even when he sent her to live with Piotr and Kitty Rasputin. He disappeared from her life for a long time. Piotr warily watched Victoria grow up, fearing she would turn into Sinister. Victoria and Piotr’s father/daughter relationship is strained at best.
When Sinister reappeared later in her life, it was then she found out the horrific truth of who he really was, and the evils he had created, along with her.
Being hunted her whole life by the psychopath known as Gambit didn’t help matters much either. But as Gambit’s age began to take it’s toll on him, he hired the mercenary known as Deadpool to hunt down Victoria and finish the job. Wade, having found out Victoria was Ms. August in his “College Babes Bare it All issue” couldn’t find it in his heart or wallet to axe the cutie. She he began hanging around tormenting her…and eventually the two became friends.

Victoria’s only consolation during her childhood was her best friend Belle, who was murdered by Gambit, her secret crush Franklin Richards…who went mad the first time he saw Victoria in full blown mutant form, and her Godfather, Dr. Henry McCoy, who also died at an old age, by Gambit’s hand.
Victoria’s college lab partner and good friend Peter Parker harbored the secret of her mutant form for many years, keeping close to her side. Victoria graduated from Empire State University with a degree in Genetics and Bioscience.

Recently, Victoria has discovered Sinister’s true reason for creating her…not to be his daughter, but to be his equal, his mate. After a shock to her system, memories of physical abuse at Sinister’s hands came to the surface and sent Victoria into a catatonic state, causing yet another of her powers to appear that mimicked his, an glowing pink energy sword, produced when her anger and fear were at peak levels.
Victoria’s one consolation to all the hardships she’s endured, is that even though she’s so far from home, and has no care about going back, she’s found a life with a team, and a love in an alternate reality version of Hank McCoy.