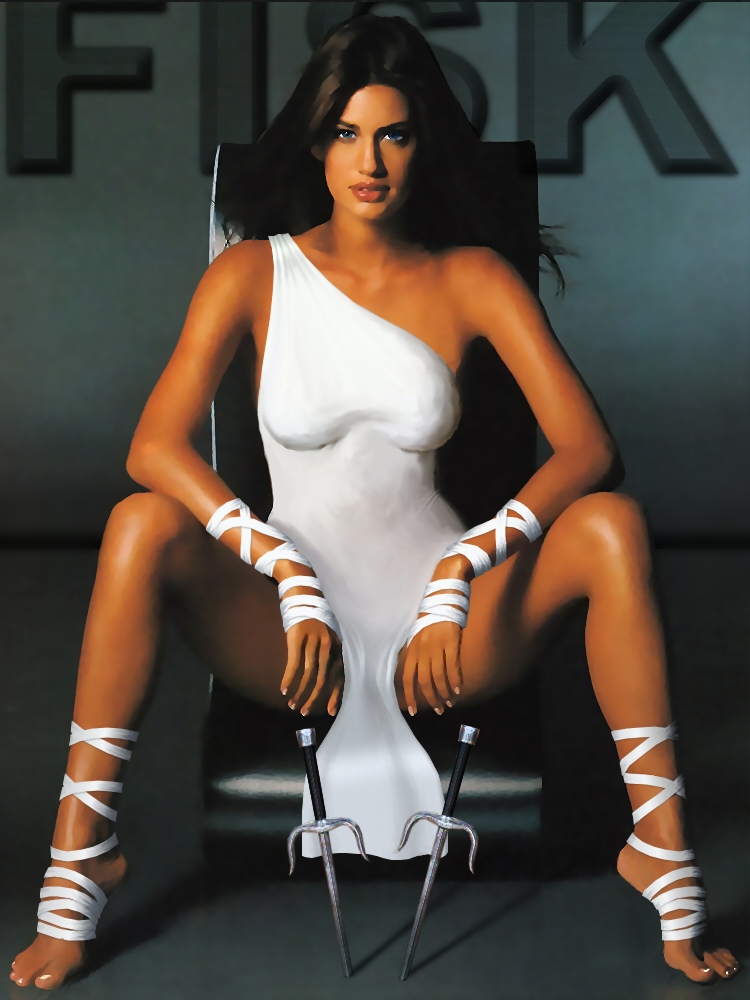 Well.. due to a pc crash I nearly lost this pic..which would have annoyed me greatly. Luckily I had saved a jpg version prior to the crash, meant I had lost all the layer info, but at least I had the pic. Anyways.. (I originally had this labelled as Penelope Cruz but it isn’t) here is Yamila Diaz Rahi as Elektra Nachios (in a Greg Horn style) applying for the post of ‘Loss Adjuster’ at Fisk Industries.

Yamila originally had on this crocheted bathing suit style affair, so the first thing I did was a hell of a lot of smudging on the main body to get it looking smooth. I also smudged out the skin to give it a painted look. Removed the silvery shoes she was wearing. Recolored the eyes. Extended the bodice up over the shoulder. The straps on the hands and feet created using vector lines, then darkened using lassoo and HSL adjustment. Then used a small brush to smudge out some wrinkling. drop shadows added to each indivual strap to give that overlapping feel. Created the flappy bit of the dress using vectors, then used HSL again to give it some shading. The sais were created from scratch using Eyecandy’s chrome tool and again more HSL adjustments to give some additional shading. Used the sai’s to create a selection cut from the floor to add some reflected color. The shadows were done in a similar fashion, then deformed and blurred. Added the FISK logo, with drop shadow on multiply layers.