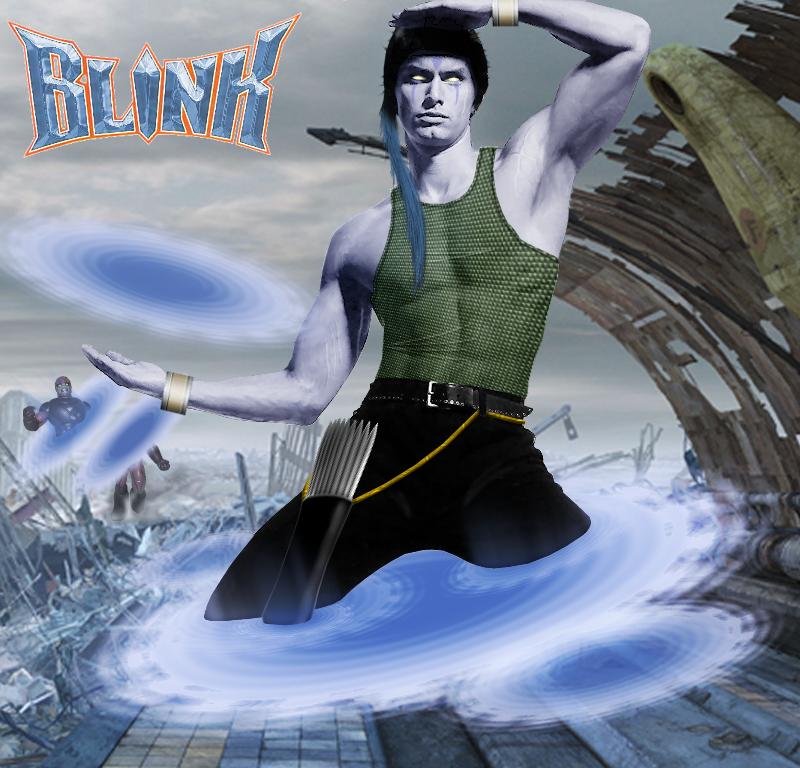 This is my ‘backup’ character for an comic based RPG called “The Nomads” that’s about to begin based on the Exiles style… my main character is Beast (Universe 666 Version :p) but I thought I best sort out a backup (in case I snuff it early on in the proceedings.. anyways.. I figured I would do a manip and it seemed to go with this theme day (although If we did another Transgender one it might have gone there) so here we go:

Base of operations: Mobile (Currently in ruins of New York City)

History: Clark was born to mutant parents, shortly before they were captured while travelling to northwards to the Canadian Border. Clark spent the early years of his life growing up in internment camps, learning to survive by running errands, always listening and learning. Seperated from his parents at the age of 13, Clark was transferred to the South Bronx Mutant Internment Center. Initially alone in the camp, which was much larger than any of the others where he had been detained, Clark began wandering the complex, learning all it’s secrets. This was a routine he had been through before many times in many camps. On one such expedition, Clark ran into an older boy, Franklin Richards and a pretty redhead named Rachel Summers, who took it upon themselves to look out for Clark. It was through Franklin and Rachel that Clark came to meet and befriend the men and women who’s selfless act would be the catalyst for his later life. Piotr Rasputin, a gentle russian giant with a talent for story telling, his wife Kate, their friend Ororo who’s startling beauty could not be disguised by the hard life they were force to lead. And last but not least, Magnus, who although wheelchair bound had such a strength of will and purpose that it was impossible to think of him as an invalid. As the next few of years passed, Clark became more closely involved with the lives of his new friends, learning of their former identities as X-men, a group of mutants dedicated to protecting both mutants and the humans who feared and hated them. He also heard rumours of an underground resistance movement making raids on the camps and sentinel strongholds up near the Canadian Border. There was also word that the Sentinel were planning on expanding beyond the borders of the former US. Clark believes his friends are hiding something from him and follows Franklin to one of the Camp houses. Slipping inside and hiding, Clark watched as Kitty returns from a sanctioned trip outside the camp for medical supplies, but she has also brought something else, a small electonic component. Clark listens in awe as they talk of now being able to disable the inhibitor collars all mutants are forced to wear. But that is the least of what they intend to do. There is talk of time travel and altering reality, much of which goes over Clark’s head, but what does grab his attention is his first sight of a mutant using their natural powers uninhibited. As the group prepare, Rachel has Kate, relax on a mattress, and then begins to talk to her very softly, calmly. Rachel continues to whisper to Kate on and off for the next couple of hours as the rest of the group come and go, obviously preparing for something that is about to happen. It is at this a gruff voice behind him tells Clark, he needn’t hide in the shadows any more. Shocked that he has been spotted Clark literally falls out of his hiding place as a short stocky man with an odd accent steps into the light. “Logan” it seems has come to aid the former X-men’s escape. Unwilling to take Clark with them due to the dangerous nature of the task ahead, they persuade him to stay with magnus to cover up their escape. The group fade into the darkness of one of the service access tunnels. Later that night Magnus and Clark hear rumors of a failed attempt by a group of mutants to destroy the Sentinel Control Centre in the Baxter Building. All the mutants are dead. The shock news of his friends death triggers Clark’s mutant ability – teleportation – causing himself and Magnus to be flung nearly 100 miles outside the camp almost instantaneously The next four years are spent hiding, fighting and learning. Magnus teaches Clark both about leadership and also techniques to control his gift. Rechristened “Blink” because of his ability to move from one place to another in the blink of an eye, Clark has gathered a small band of similarly minded individuals around them all with one purpose – to end the reign of the Sentinel.

Strength Level: Clark has the normal human strength of a man his age, height, and build who engaged in intensive regular exercise

Known superhuman powers: Blink possesses the ability to generate teleportation warps, allowing him to displace people and objects. His maximum range hasn’t yet been determined, although with his current level of expertise he can move his entire group instantaneously a distance approximately 500 miles. Blink can also manifest the energy portals in the form of discus shaped weapons, which cause their targets (or parts of their target) to teleport. This power can be used offensively and defensively. The effective range of these discus is approximately 200 metres. Additionally Blink carries adamantium darts (liberated during an early mission) which he can use over a much longer range. By throwing the dart, and instantly ‘blinking’ it, it can effectively hit its target with the same velocity it had upon leaving his hand. It is unclear as to how Blink targets the destination for teleportation, but he may have a subconcsious precognition which automatically retargets him before materialisation to prevent appearing inside a solid object.