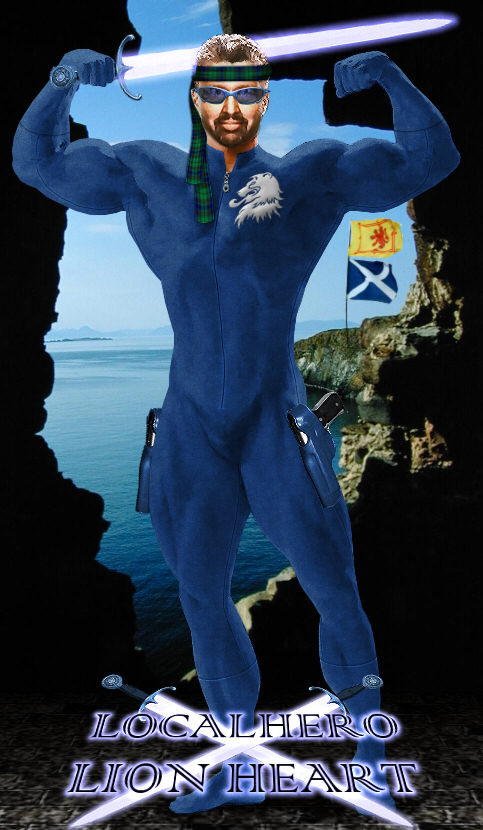 Another theme day submission. In the Ultimate Universe, LocalHero is the protector and Champion of Scotland, heir to the mantle of William Wallace.

Back story: Was struck by lightning during a freak storm while visiting the Wallace Monument in Stirling.

Abilities: LocalHero has the ability to generate highly charged plasma using metallic objects as a conduit. Skilled Marksman and Swordsman. Exceptional Athlete and Martial Artist. Using metal threads laced through his uniform to channel plasma and create a frictionless field can achieve flight capability at up to 200MPH for approx 2 hours

Ok.. notes: Base Model: Chris Genkinger (Body Builder) Recolored the body and added my face (well one side of my face flipped and resized. Background: Window view from Duntulm Castle. Flags cut from seperate image, plag pole extended and placed on the cliff side. The floor is from a stone/brick texture i have, deformed and shaded to add some realism. Costume: Done using my usual method. Glasses: cut from Cyclops X2 image.

Used a mask to alter the lens transparency Colorized blue to match costume. The tartan headband was a late addition, I wanted to include something of my heritage, so that is my mum’s Clan Tartan – Mackay. The logo is the one I have used for years, it was inspired by the Lion Rampant on the gold flag. I gave it a raised feel using Eyecandy Bevel Boss filter, then deformed and manually reshaded it to match chest. The zipper is from the same base pic i used for the Vamp:Spidey Iceman manip.

Sword/Guns: from previously downloaded stock of objects. Recolored and deformed to fit. Glow on sword done using Eyecandy’s corona filter. I was tempted to do a belt, but then I decided the gun holsters were an integral part of the costume.. Used the sword image again in the logo to reemphasis the scots feel by replicating the St Andrews cross design from the flag. All original backgrounds removed using mask layers