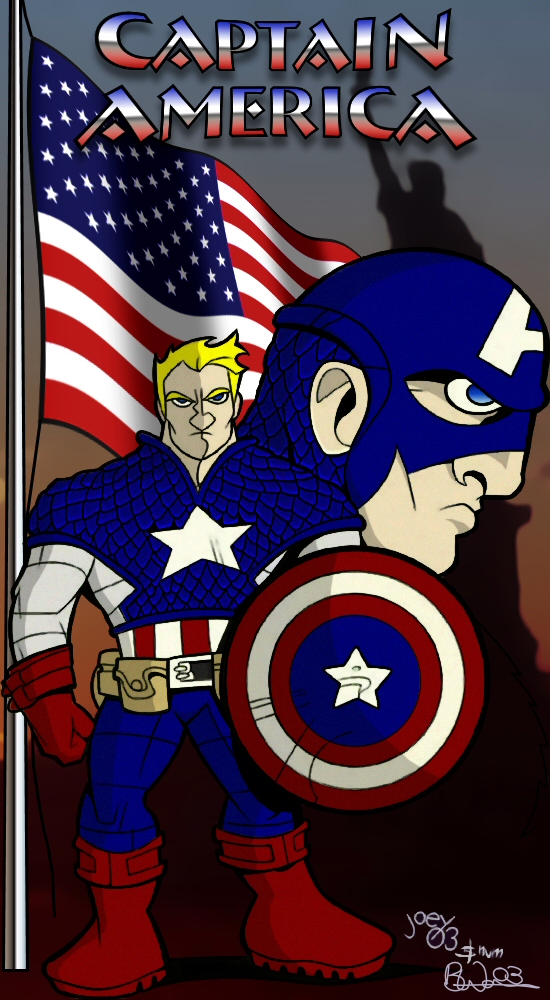 Well I almost forgot all about the 4th July myself, but I managed to pull this out of the bag. A digitally colored and altered Joey Mason pic.

Step 1: Darkened the inking by use of multiply layers. Removed the excess white space around the outside. The shield originally had 4 circles(i dunno why) so i corrected this by erasing the two innermost circles, and replacing them with a larger central disc and a thinner circle.

Step 2: Using the lassoo tool so block of areas I filled them with blocks of colors. The disk colors were created initially with vector shapes and adjusted to fit. This layer was then merged into the main color layer.

Step 3: Used the lassoo tool again to select areas of the main color block. these were darken using the HSL dialog.

Step 4. In order to give a bit more depth to the colors and to the scales, added gaussian noise to the color layer. Cut out the scales from the main inking layer (this was on top set to multiply) and Negative’d the colors. Offset this selection slightly from the black ink and applied a small gaussian blur and set the layer mode to dodge. duplicated this layer again, applied a higher level of noise, colored blue, and set to hue at 25 % opacity.

Step 5: Selected a suitably patriotic background (in this case a sunset shot of Statue of Liberty). (A) Flipped the pic left to right. Applied an edge preserving smooth of about 15. (B)Duplicated the layer and colorized it blue. (C)grouped these layers together and added a gradient filled mask to the blue layer to give an effect of sun rising. (D)selected the layer group an using the inking outline as a guide, created a mask to allow the colored Cap to show through.

Step 6: The flag was created on a seperate canvas from an image I create for a previous Cap pic. Added a black border to make it fit into the inking style more. Applied a wave distortion with horizontal amplitude of 1 and wavelength of 100, vertical amp of 4 and wavelength of 40. created 2 gaussian blurred black filled rectangles on a new layer, set to darken at about 30% opacity. The same done with white rectangles on a lighten layer. Used the distorted flag to create a mask to hide the lighten and darken overspills. all merged into one layer. used free deform tool to distort the flag further into a more realistic form. The pole is a gradient filled rectangle and the ropes were done freehand. transferred to the main canvas and positioned. Used the main ink layer to again mask off the flag behind Cap.

Step 7: Logo added in Bremen Bold on two layers, one with a preset chrome fill, and another with a custom Red White Blue fill. messed about with the layer blend modes to get a nice effect (chrome layer is on multiply at about 75% opacity). These were then merged and a pincushion lens distortion applied. Added a drop shadow. Finally brought up the signatures to a new layer and reversed the color.

I made this animated version to illustrate the coloring process:

Anyways Happy 4th of July Weekend to All.