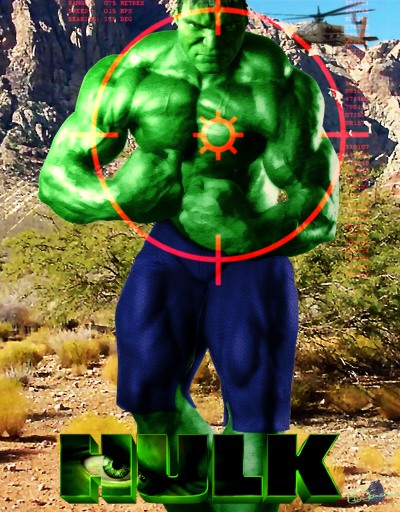 The guy Hulk is bearing down on better get his shot of quick, cos the speed the hulk is moving he only has about 5 seconds to shoot (or go “OH SH*T!). :p

This started out as a pic of bodybuilder Orville Burke, I liked the pose and figured it might make a good Hulk. I cut him out of his original background and colored him green. His proportions weren’t quite right for the hulk so I cut and enlarged his hands/forearms and his calfs using smoothing and cloning to get back the missing detail.

The head is taken from a teaser photo of the hulk that was released yonks ago. I upped the brightness by duplicating the pic onto a couple of new layers set to screen. The head was then cut out and positioned over orville’s. I had to tweak the colors a bit to get a match. Over the top of this lot I put a leathery skin texture for some additional depth.

The pants were created in my usual manner of multiple layered textures and shaders. The background was a random Nevada desert shot from the net. The helicopter is one of the ones I used previously in my Ultimate Hulk/Cap pic a few months ago. The target sights created using vector shapes and set to screen. Added some text to show range/speed etc and on the other side of the target is a list of random numbers. The hulk logo was pieced together from the logo in the hulk movie site.

I also made a wallpaper version: 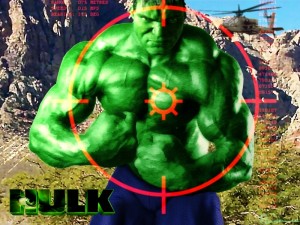