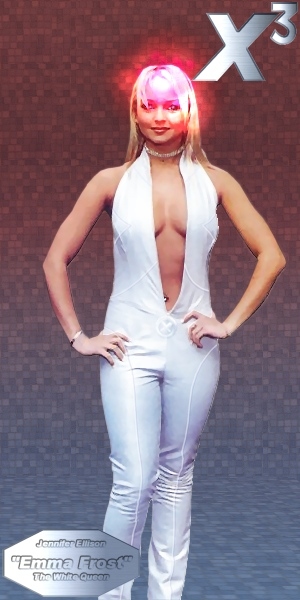 Ok.. same actress as my previous Emma Frost pic, but this time I decided to try my hand at a movie style costume, rather than civies. Seeing as the White Queen always wears white(ish) stuff, I kept the movie costume white rather than black, but tried to create the style of Jean and Storm’s costumes.

Jen was originally wearing a blue leather jump suit. I cut this onto a new layer, desaturated until I was happy with the tones. This layer was then set to Hard light. Power effect, and X-ornaments taken from previous pic. Background created from scratch using freeform deform tool on a tiled texture, with gradient fills on top. The raised sections of the costume were created in the same way i described doing seams before. I think it turned out ok, and hope the movie costume is something like this. I think the standard held on by hope costume she wears now wouldnt work in the movie.. not that i would mind seeing them try;))