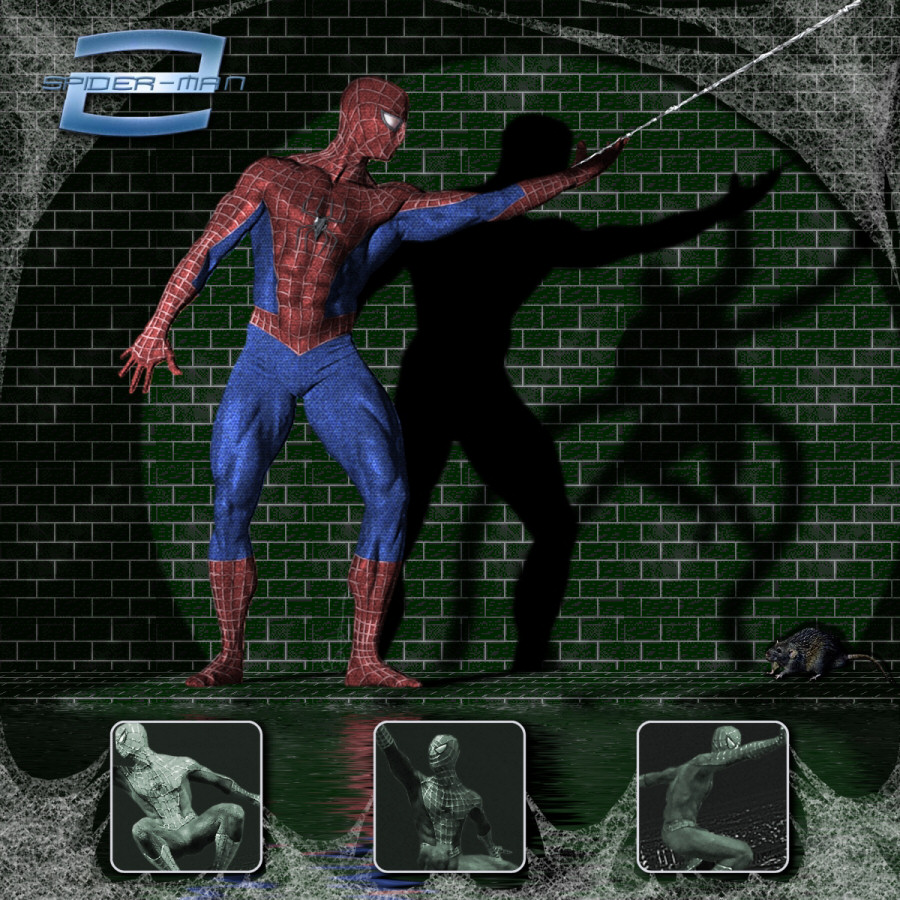 I watched Spiderman DVD again and had the germ of an idea for a scene I wanted to manip. The idea was for a scene from the next Spiderman movie incorporating the DVD menu/border frame.

The base pic was an old black and white pic of body builder Bill Davey posing in a spotlight. He wasn’t as bulked up as he seems to be now. The pose seemed good for spidey preparing to swing off. As opposed to my usual style, first thing I did was create a background for the pic by using a layer filled with a brick texture. I then deformed part of this to make a ledge for him to ‘stand’ on. It was originally going to be a ledge on a building but I remembered my old Spiderman game with spidey escaping through the sewers being chased by Doc Ock and that set me on the way.

Used Xenofex Little Fluffy Cloud filter with a lot of noise added to add the green slimey texture to the wall and ledge. The spotlight on the original pic gave me the idea that it could be the light from the sewer entrance case on the wall. I used vector circles to recreate the spotlight (which was incomplete at the bottom and

side where it went off the original pic) and deformed part of that to match the angle on the ledge. This was softened and the blend mode set to soft light.

The original shadow was also cut off at the edges so I used the vector tool to draw around it and extend the arm. Ock’s shadow was created from scratch using vector drawing. This was blurred and the layer set to soft light to give a sense that the shadow was cast from further away. Now for Spidey himself. Cut out the model from the base pic and promoted to a new layer. Used the smudge and soften tools to remove the edges of his shorts, facial details and generally smooth out the body so it looked costume like.

I created a new layer filled with a chainmail texture. This was colorized blue. Using the body to create a selection, the extra was cut away, leaving just spiderman’s shape. I used the lassoo tool on this to select the areas of the body to be colorized red. I nearly forgot that the red strip down his extended arm would be twisted around, due to the angle of the wrist. I moved the body layer above the colour layer and set it’s blend mode to overlay. This gave me the highlights and shadows of the body providing definition to the costume.

Time to take a deep breath and start the webs… using the vector point to point line I layed out the verticals upto the collar. I worked out the pattern on the face using a quick pencil sketch. Extended the verticals up from the collar to meet over the nose. The horizontals and face circles done in the same way. This was fiddly but didn’t take as long as you might expect. This was done using a silvery metal texture as the pen color. Used the webbing as a selection and create a drop shadow slightly offset. This gave the 3d look (i hope) This shadow layer was set to multiply at 50% opacity.

The spider was created much larger in vectors, used to create a selection. This selection was used with Eye Candy chrome filter to get a 3d look to it. I shrunk this down rotated it to match the pose before placing it. Eye created in the same way. The web flying out the pic was created using three straight vector lines (with own drop shadows) with a squiggly line drawn over the top also with a drop shadow. Added a shadow web coming from the shadow arm.

At this point I was about to add some logos and stuff, but still thought it looked a bit bland. So copied the layers to a new canvas, and merged them. I then used Flaming Pear’s Flood Filter to create some murky water. This was cut out and placed back into the original picture. I think this added a whole new dimension to the pic. Time to add the little extras. The rat was found on google, cut from it’s original pic, reshaded and recolored. Added drop and wall shadows for it and placed it against the wall. The cobwebs were created from a texture downloaded from the net. The texture was rotated to various angles and used to fill layers set to screen which made the black areas see through.

The layers were built up to give some depth. These cobwebs were to form both part of the scene and the DVD menu frame holding the scene selection panels and the corner logo. The logo itself was cut from a promo pic of a Spider-Man 2 poster. The three picture panels (supposed to be for scene selection) were created using photos of the model of the movie Spiderman from various angles combined with excerpts from a panoramic view of Manhattan at various angles. The panorama was actually a daytime shot which i made negative, then colorized a pale green, and set to multiply over the original pic – and made a night view. The combined model and background pics were tinged grey/green and a border added to make it look like a nightvision photo. Sections were cut using a rounded rectangle (from the vector used on the borders).