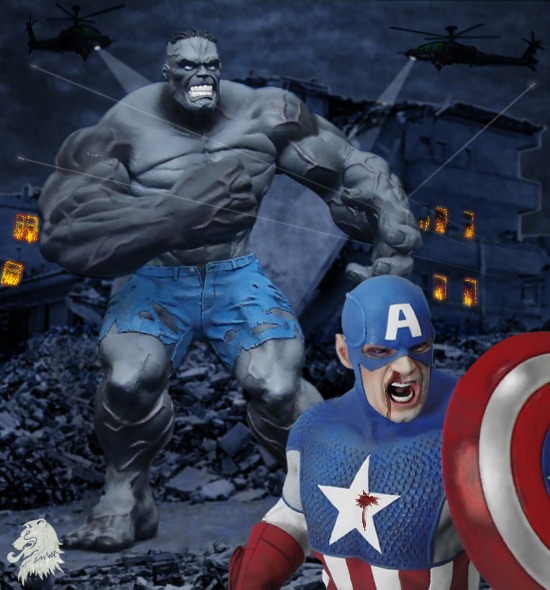 Well.. what we have here is my attempt at recreating part of the Hulk Vs Cap battle from Ultimates #5. At this point they have had a tussle, with Cap coming off the worst at first. He steps back to check on the other team members before plunging back into the fray…

The image is made from a poseable Hulk statue and a Ult Cap America bust (both Bowen i think..). The hulk statue was posed against its box so the first thing i had to do was remove the box by cloning other parts of the grey dappled background. Using the smudge tool i then removed the joint lines on hulks legs arms ankles and neck. The Cap bust was simpler, as it was to be in the foreground, i just removed all trace of the original background.

I found an earthquake damaged street scene on Google and cut it up into chunks for the mid ground between hulk and cap and the background behind them. These parts were all tinged with a blue wash and darkened to keep the tone matching. Fire and glow added to the windows.

I desaturated the Cap layer by about 25% (more on that later). I roughed up Cap a bit by giving him a black eye and bloodying his nose, with a splash of blood onto the star on his chest too. This was done on an overlay layer with muted reds and blues that were then smudged to blend in a bit. Added dirt and dust to cap’s uniform by creating a smoke effect on a ‘color’ layer using Eye candy plugin. This was then coloured blue again to match the street dust. The shield was copied to a new layer and PSP built in chrome filter applied. This layers blend mode was set to multiply at 50% opacity. I then duplicated the main Cap layer and applied some spot lighting using the PSP illumination tool. This layer’s mode was set to soft light at 75% opacity. This brought the saturation levels back almost to where they were, but with a new lighting bias. (see it told you i would get there…)

The sky was from the net, recoloured and flipped. The Apache helicopters were also from Google, deformed to fit the pic. Added lights manually. The search lights were a gradient filled triangle, softened and set on a screen layer. The flames in the building windows were made by using the pen to draw in red, then two oranges, then a yellow, with the same colours used around the window frames. This layer was then duplicated set to screen and gaussian blurred with a radius of about 3 to get the glow. The three tracer bullets were done in a similar fashion, with the path being gradient filled vector lines.

Altogether this pic is made of about 30 layers.