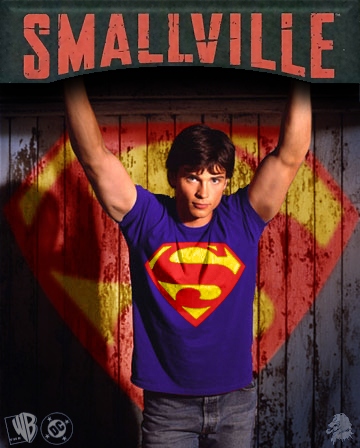 Just messing about with layers and such. Found this pic of Tom Welling on the smallville website. Recolored the tshirt from red to blue. The logo on the shirt and on the wall behind are from my own vector version. I tried to make the chest logo look like that plastic stuff they put on tshirts that you arent supposed to iron. This layer is on twice. once set to dodge, the other set to color.

The background wall is intended to look like faded paint. the logo layer was blown up and softened, and set to softlight. cut out where tom was standing. to add a bit more to the background, the wall not covered by the logo has a blue gradient fill on a multiply layer. Smallville ‘hoarding’ added as a flat black layer, overlayed with a noise texture. text created from dc comics cover, distressed slightly. added 3d lighting using eyecandy glass filter. drop shadow added. added logos to bottom.