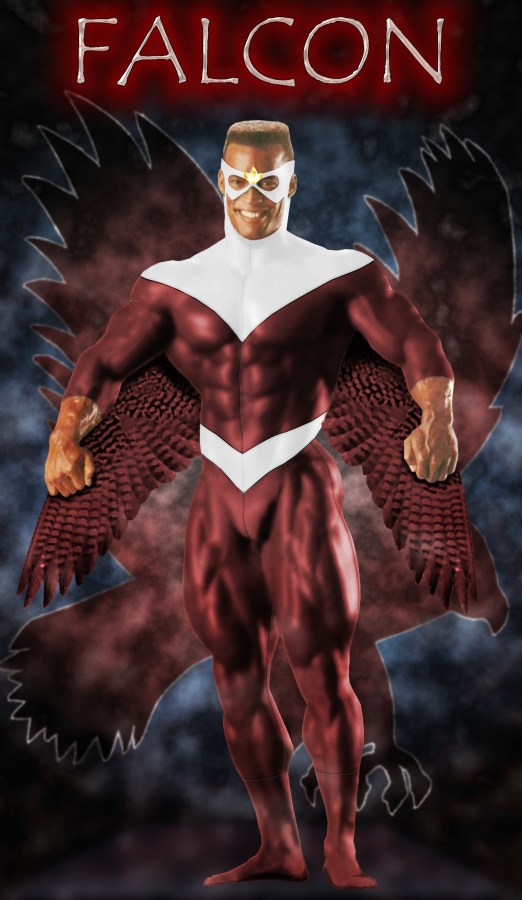 Ok, here is another piece that I have had hanging about in my works in progress folder for what seems like forever – The Falcon

I decided to take another stab at it from scratch. The model is bodybuilder Shawn Ray. First thing i did was cut him out from the background. Duplicating that layer, I used the smudge tool to soften the muscle tone where the uniform would be. I duplicated tis softened layer. I colorized this layer a deep maroon. The other softened layer I adjusted the lighting and saturation until i got a near white. These would form the basis of the uniform by strategic use of the lasso tool to cut away the white.

In order to get the seams I used the vector tool to draw in black initially each seam. this layer was set to overlay. I duplicated this layer and changed the lines to white, offset slightly from the original and set it to softlight. I think this gives a nice feeling for the seams and joins. The darker layer was duplicated and gaussian blurred to give some depth. The wings were taken from an actual falcon. The uniform still looked a bit flat, so i found a nice leather texture which i overlayed ontop of the colored layers. It hasnt survived the reduction to fit the size limit (C2F) that well.

The background was created by using a picture of a falcon in flight to provide a base for outlining with the vector tool. this outline was used to contain two seperate gradient fills, red inside, blue outside. this filled layer was set to multipley over a plugin generated cloud layer. Another cloud layer was put over the top of the whole pic set to soft light. I think all in all it turned out ok.