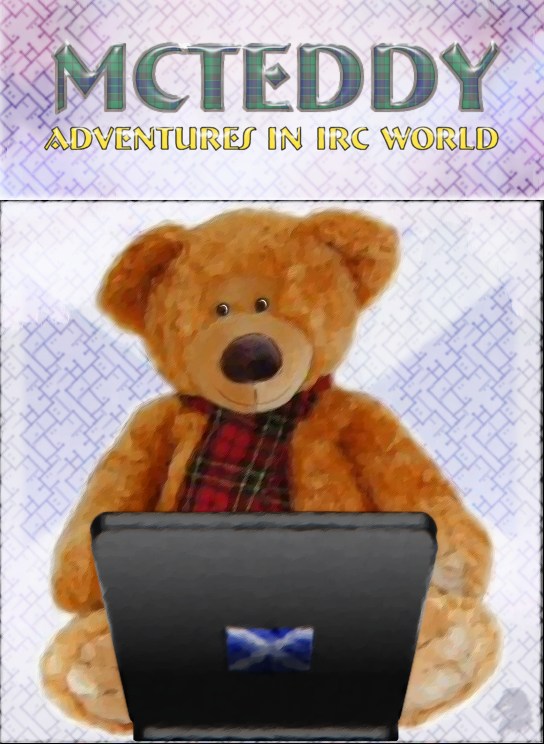 This is a concept for a comic/strip I have been thinking about. It is still early days yet and i might not take it anywhere, but i thought i would do a character pic/profile. It turned out kinda like a comic cover i guess. Mcteddy is an IRC bot that due to sitting everyday for years watching the conversations of others around him has gained a self awareness. Taking along his slightly less evolved bot buddy Mctavish he embarks on a series of adventures around IRCNet as he attempts to discover what this life thing is all about The stories would cover his interactions with all those other lovely people anyone who uses IRC regularly know and love.. Skript Kiddies.. L33T5P34k3r5.. etc. I dont know if it would interest anyone, but if i ever get some time to sit down and plan it out properly, i may do it justice someday. For those interested Mcteddy is an actual IRC bot.. and quite a clever one due to the additions its master has made..on IRCNET channel #Scotland where i can often be found. Artwise this started out with a photo of a teddy bear. Using this as a base, i smudged it up to look a bit painty. The scarf was there already, just had to tart it up a bit. Added highlighting to the eyes n nose and added the smile (tried to keep the stiched look). The laptop is made of deformed rounded vector rectangles textured and shaded. The background is made up of numerous layers.. a foggy pic of stirling castle, a saltire, that diagonal circuit board type pattern. The logo font is Bremen. The pattern used in the Mcteddy part is my mum’s clan tartan – Mackay. I wanted to make it look raised, so i applied the glass filter from eyecandy and then softened the edges.