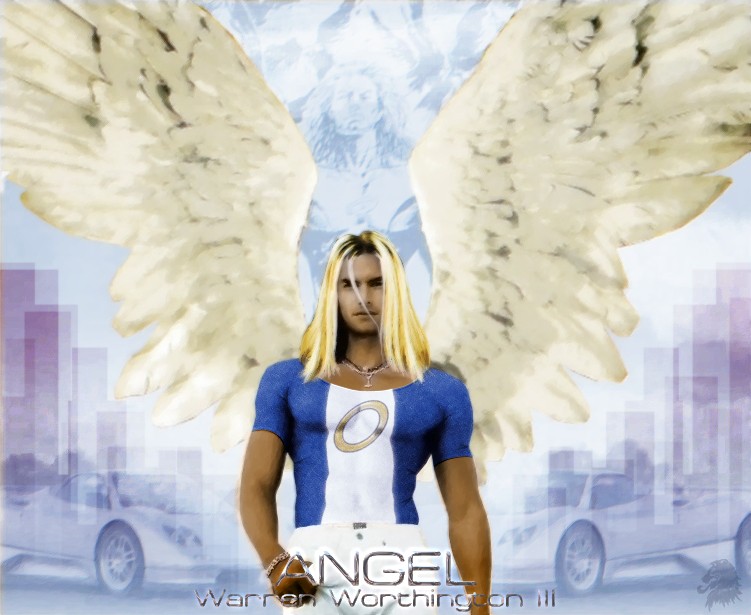 This is the follow up to my Angel Introspective manip using model Marcus Schenkenberg as Warren Worthington III (while still in his post Apocalypse blue phase).

Starting with the previous manip (minus the ornaments), the first thing i needed to do was recolour the skin to a more natural tone. After a few failed attempts, i found that by selecting the blue skin area, promoting it to a new layer, making it negative, and setting the blend mode to colour, i got a nice tanned look. I cut away the areas of the new ‘skin’ where i still wanted the tshirt to be blue but i found it was too washed out. so i again selected the blue skin promoted it to a new layer and set the blend mode to multiply to get a richer blue. A similar process was done to create the white central strip.

The halo was done using the vector tool and highlighted and shaded manually. The collar and sleeve edging was also done using the vector tool. wrinkles on the tight tshirt body and sleeves drawn as small Vs, then smudged to give a nice feel. The tshirt still looked a bit flat, so i had a look through some of my textures and found a nice one called fauxsuede that i applied over the top on a soft light layer. The background buildings are simply lots and lots of gradient filled boxes layered on top of each other. The car i used is the Pagani Zonda, again on a soft light layer. Between the wings I added a magazine scan i downloaded from the net of Angel in costume but still with his long blond hair to match my image.