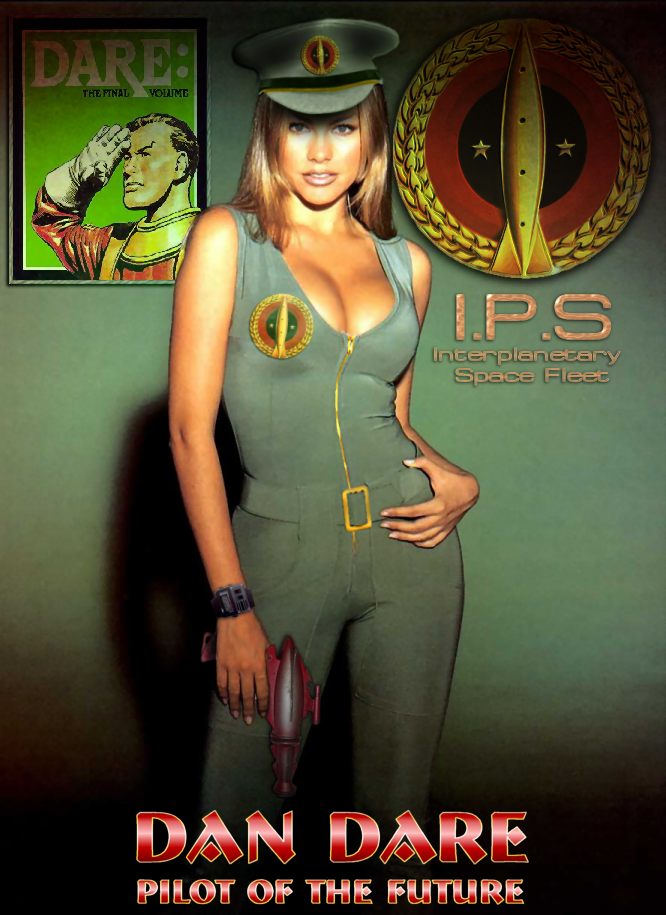 Well here is my interpretation of a female Dan Dare. For those of you not familiar, Dan was a character who became famous in the pages of Eagle comic, originally in the early 50s, but was reintroduced in the 80s.

The model for this pic was Sofia Vergara. The green jumpsuit she was wearing was just ideal for this concept. Although it may be a bit lost in the shadow, the first thing i did was giver her Dan’s distinctive eyebrow. I recoloured her eyes. Next I created the metallic buckle, and recoloured the zipper to match. The raygun is an actual Dan Dare Raygun that you could buy, shadowed to blend in with the pic. The hat was added, and recoloured by hand to match the jumpsuit. additional shadowing added. The IPS insignia used throuhout the picture was downloaded from the web and used at various sizes and various level of drop shadow and blur. the large one was also embossed to give it a more 3d look. The watch is actually a 70s attempt at a watch/voice recorder, rotated and shrunk to fit, with shadows added. finally added the framed Dan Dare pic in the corner for reference. the pic and the IPS text make it seem like a lobby or waiting room. enjoy local