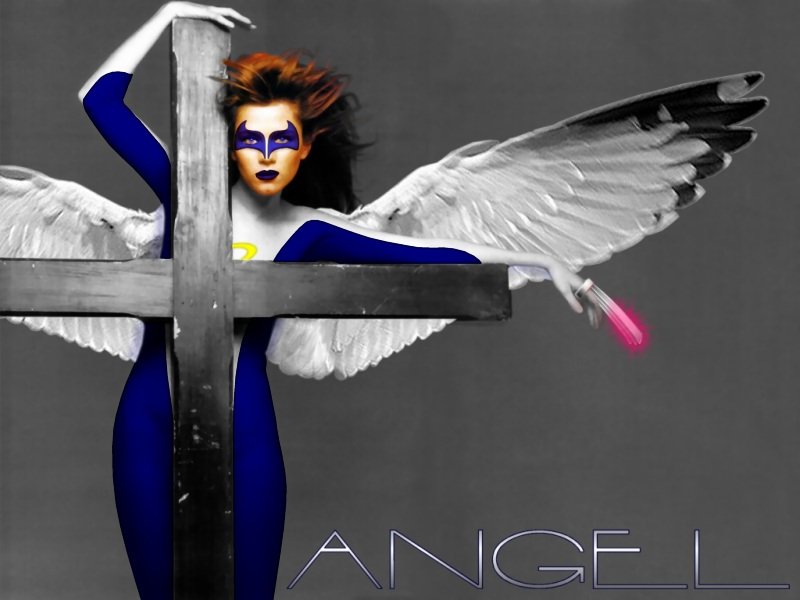 Angela Braddock Worthington, only daughter to Betsy Braddock (Psylocke) and Warren Worthington III (ArchAngel). Born in an alternate reality where the Sentinel have hunted mutants almost to extinction, Angela has been on the run with her parents since the day she was born. Her parents have been killed. Angela is all alone. She has had enough. Using her fathers old costume, she fashions a new identity for herself and takes the battle to the Sentinel. She becomes Angel.

Powers: Angie is a mutant who can fly by means of natural wings, which span 10 feet from tip to tip, augmented by telekensis (both powers inherited from her parents. Her anatomy is adapted for flight: her bones are partially hollow like a bird’s, her body is almost devoid of fat, she possesses greater proportionate muscle strength than a normal human. Angie also has the ability to manifest a molecule thick energy field, endowing blade like objects with the capability of slicing through virtually any substance. Her telekenesis means she has the ability to levitate herself and up to 500 Pounds.

Well thats the story…. here are the facts… Base Model: UK Actress Anna Friel How it was done: duplicated original picture and greyscaled it as a new layer. erased and smudged out the face and hair. removed some blemishes from the body, then added the classic blue costume. eyes coloured blue. mask and lipstick added. wings added and shaded/coloured by suit reflection. three bladed claw with hand grip added, shadows and reflections worked in. added glow effect to the blades and added corresponding highlights to the hand and grip. finally added part of the halo to the chest, and the text. Hope you like it. LH;)