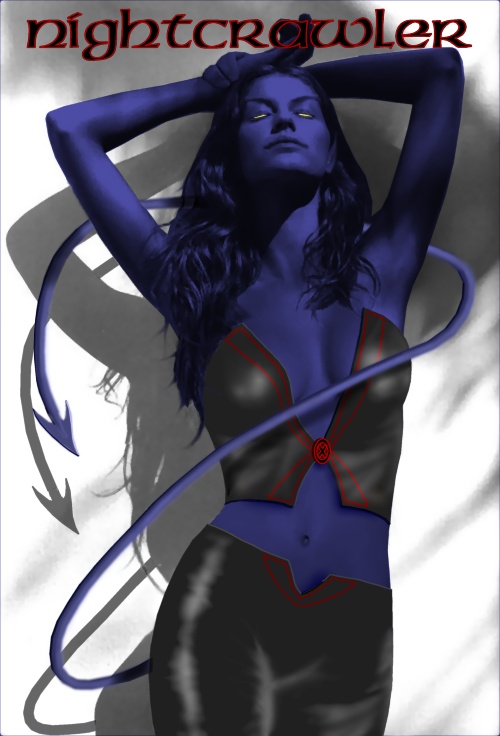 For this ReDo, I decided on Darth’s female Nightcrawler concept with Gisele Bundchen.

First job was getting rid off the original clothes from the base picture. this was done by adding new layers with the stomach and bosom from a couple of other gisele pics. these were smudged and blended together and everything converted to black and white. next step was masking of the model from the background and colouring her blue. the new costume was added in stages using the vector drawing tool. the main black of the uniform was drawn on. then highlights and low lights added at the edges. then the major highlights were added over the uniform to give a leather look. a lot of blending, softening and smudging later, it was time to add the large red ‘X’ over the front of the uniform.

i then went back to the base layer and smudged the hands to create two fingers on each. the ear and eyebrows were also altered to a more elfish look. the eyes on the base pic are closed, so a little yellow was added to give the impression of slitted eyes. next the tail and shadow were added using the vector drawing tool again, in various colours blended together. an x-logo button of my own design was added to the front of the costume and some shadows cast on the body by clothes added. the tail was too light, so i darkened it by 25%. All done in PSP7. It took a few hours to find the source pics and decided on how i would do this, the actually manipping took about 6 hours in total. im very very happy with this manip 🙂

Looking back I need to add more definition to the pants, more and darker shadows would do it. Might have to redo this redo 😉 Also this was before I discovered Exiles but i think it could pass for Nocturne, the parallel universe daughter of Nightcrawler and Scarlet Witch.